Last night, while avoiding homework by watching t.v. with the family, I stumbled into an episode of William Shatner’s interview show, Raw Nerve. It came on right after a 16 year old tribute to the Star Trek franchise. Odd juxtaposition.

The show had been taped in 2009 and his guest on the show was his long time co-actor and friend Leonard Nimoy.  Mr. Nimoy was discussing one of his first ‘ordinary people’ shoots, “Secret Selves”.

The project began in 2008 when Mr. Nimoy invited some of the denizens of Northampton, Massachusetts, where he shows his work in the R Michelson Galleries, to be photographed as “who you think you are”.  He wanted to create portraits of people’s inner alternate identities.

All the participants of the shoot were video taped being interviewed and photographed by Mr. Nimoy.  You can watch some of them at this site: <http://www.rmichelson.com/Artist_Pages/nimoy/Secret-Selves/>.

The premise got me thinking and imagining who or what I might want revealed as my secret self.

I drew a blank.

I have an ex-sister-in-law, who was once married to the AH’s brother, Bucket.  She’s a bit of a changeling, a chameleon.

When I knew her back in the dark ages, she was the “perfect”, church going, small town, country wife and mother.   She had a great sense of humor and an understated intellect that was much deeper than any of the AH’s family could ever appreciate.

We lost track of each other after my expulsion from the Hatfield’s wagon circle.  The ubiquitous FaceBook allowed us to reconnect.  Turns out, she, too left the oh, so warm environs of the opprobrious Hatfield’s.

The sense of humor is the same but, the Chameleon has changed.  Aside from an ever evolving hairstyle, Chameleon has reinvented herself or rather become, who she was supposed to be – a writer, a photographer, actor, explorer of life and genuinely happy person. 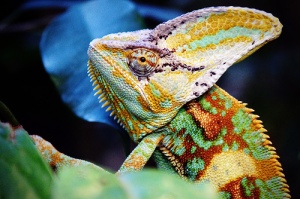 What has this to do with my inner alter ego?  I found myself a tad bit jealous that Chameleon had the courage to find, and work toward, being her secret self, while I can’t even pull up an idea of whom I would choose to be for a photo session.

I guess I can placate myself by thinking that she has another inner self to yet reveal – exotic dancer perhaps? 🙂

Splat is a friend I’ve know for over 30 years.  He’s a special effects make-up artist. Really, he is – for the movies and television (The Patriot, Zombieland, & soon to be released The Three Stooges, among many others).  I remember him back in high school, experimenting with self-made, latex masks and pulling his eyebrows out by accident (always lubricate them first before applying casting materials).

He’s improved since then.

Splat has been living his dream.  I admire him greatly for sticking to it.  He’s told me that sometimes its hard, but oh, so worth it all.  He gets to live out alter egos quite a bit, maybe not quite his true secret self, but characters that he creates. That makes me smile.

I have yet another friend LC, who once had a lucrative career as a director of a lab.  She felt unappreciated and undervalued in that position and chose to leave it for what seemed a more self fulfilling adventure.

It was not to be.

But through a series of sometime severe growing pains, LC found herself as a teacher.  She nows enlightens college students to higher learning and understanding of the human psyche.  She’s found a different self to be and seems to be happier for it.

I do think she would rather be a globe-trotting, secret agent though, but that’s just my humble opinion.

It’s becoming clearer to me now.

As I think about my friends and Mr. Nimoy’s subjects, I have begun to realize I’m thinking too hard.

One’s inner or secret self is not about thought.  Its about feeling.  Its about those nebulous, moveable, visceral emotions that keep one going.

So who or what is my secret self?

Perhaps that is my secret self – I am a Janus, a Zaphod, Lon Chaney, Sr.  I wear many hats, looking forward and back, juggling the possibilities of what will be, what is, what was and remolding everyday never quite settling on any one thing.

Would you be able to accept Mr. Nimoy’s invitation?  Could you settle on one representation caught in time?

Let me know.  Who or what is your secret self?