I don’t know if I’ve seen Yoda this excited since he was anticipating his first ride on the ‘train’ at the Riverbanks Zoo.

From the moment he found out that we would be riding the Metro, he was practically vibrating.  This was icing on the cake for our visit to DC.

When we got on the red line toward the Chinatown, Yoda was overjoyed to find out that he could stand in the aisle and hang on to the support pole.  The swaying and inertia was great source of entertainment for him, us and 30 or so other passengers, as we were treated to a 20 minute pole dance.

When we finally stepped up into the light of day on the Mall after that long, vertical rise from the subway depths, Yoda squealed with delight.  “We’re in Washington, DeeeeeCeeeee!”.   Again, our kid is not the Disney Magic Kingdom type.

We briefly toured the National Portrait Gallery.  It had been recommended that we see the ‘electric wall’, that Yoda would get a kick out if, so we felt a bit obligated to seek it out. Don’t go see it if you are prone to seizures.

Next order of business was to find the Spy Museum.

After a couple of prerequisite wrong turns, we found it – taking up an entire block.

We toured the museum.  I’d tell you about it, but then I’d have to kill you.  I’ll just tease you a bit and let you know that Yoda loved crawling through the air shaft and the gift store.

The Spy Museum is located in the Chinatown area.  Neither Bashert nor I in all the visits made up here have ever been to Chinatown, so we took this opportunity.

We ate at a place recommended by the DC for Kids guide, The New Big Wong.  What happened to the Old Big Wong, we didn’t want to know.

I was fascinated by the Chinese family that came in and was seated next to us.  They ordered what we were afraid to.  When the dishes came there was a plate full of what looked like still moving squid and another with vegetables I couldn’t quite identify. 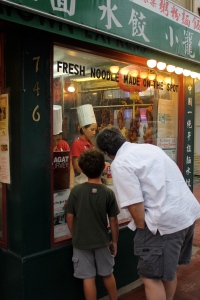 When we finished our meal and I mean finished, we walked about Chinatown for a bit.

Yoda and I were transfixed by one restaurant that had a viewing window where we could watch some dim sum being made.  It was also pretty cool that they had the ducks with the heads still on and complete squid soaking in water.  This was the real deal.

Bashert stood back from that one.

After being on the road for several hours that morning, spending time at Echo Park and then making this trip into the city, we were pretty beat.  It was time to head back to Bashert’s cousin’s house where we are being hosted.

The ride back was filled with chatter and Yoda seeing if he could hear conversations around him with his new spy phone.  Bashert and I felt a bit more like the ‘going’ portion of Norman Rockwell’s painting, Coming and Going.

Day one of our DeeeeeCeeeee visit was complete.