We have left after two days and a half days in Colonial Williamsburg, VA.

A rousing good time was had by all, especially if we are to judge by the fit of pique that Yoda threw last night.  He was so exhausted he was literally screaming into his pillow.

It is a family tradition to recap our favorite thing about our vacations.

From this leg of our week’s journey, Yoda declared, “Everything!”; my favorite was my birthday luncheon in the tavern and Bashert chose yesterday’s recital of the Declaration of Independence.

I think a close second for all of us was the dinner we had a Shield’s Tavern on our final night.

We normally eat dinner around 5 since I have to go to work immediately after, but that’s neither here nor there for this story.

The program we had attended lasted from 5 to 5:30 and we were stuck with almost two hours of roaming around to do after all the shops had closed down.  Bashert convinced me to go ask if there had been any cancellations.

Luckily there had and we made it in to dine about 6pm.

As it had been in the tavern on Monday, the atmosphere was really fun.  The waitress wasn’t near as saucy, but we were seated in the VIP room, so I guess they needed to be a bit more mindful of their manners.

The food was wonderful.  We each ate more than we thought we could, even Yoda finished all his macaroni with butter sauce and found room for ice cream. 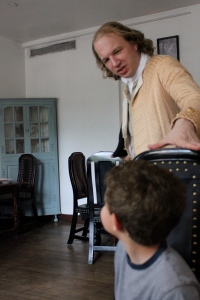 We were entertained by a duo that sang a couple of ballads and a fun rendition of
“Yankee Doodle”.  We even had a dandy come in and give Yoda a lesson in what it was like to attend school during this time period, as well as, the proper way to bring a drink to your lips rather than tipping the head back.

It was all well worth the heart attack I nearly suffered when the bill arrived.

On our stroll back to the hotel, Yoda brandished his pistol and practiced his proper greeting with his brand new tricornered hat.

A lucky couple walking toward the colonial city was treated to his most elegant and flourished bow.  Yoda said the gentleman saluted him in return.

Bashert & I were glad that we had extended our visit for an extra day.

And that we had chosen the right magic kingdom. 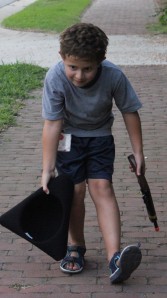