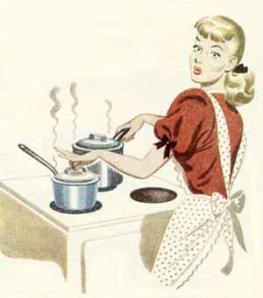 I owe my mother apologies for many things done or not done over the years, but I believe high on the list should be a hearty, “I’m sorry” for the repeated utterance of the following three little words:

My Mom faced this eternal (infernal) question each night from four children, a husband and various and sundry pets who passed through our way for thirty years or so. Bless her little heart. I wonder if she, like I now, wanted to slap a frying pan upside someone’s head when those three little words came out?

Mom made do. I admire that and wish I had more of her “do”. She made supper and we ate it (with the exception of my younger brother Ernst, who subsisted on peanut butter & jelly sandwiches for 18 years, but that is another story). We had a meat, a veggie and a starch every supper. She made it work, whether we deserved it or not.

When we asked “what’s for supper?” I’m sure there were plenty of turned up noses at times, but the menu she worked out is what we got. There was no ditching the kitchen and heading off to the nearest fast food establishment. Going out was for special occasions and with dinner guests numbering from four to six most of the time, it was rather expensive, too.

We lived on my Dad’s one salary. Mom made it work. Some nights we had Spam patties as the meat source, other nights we had round steak that had been split in half lengthwise then pounded out to stretch. There were other nights of fried chicken or pork chops and mashed potatoes (not applesauce).  Looking back those must have been the times my parents were more flush, but it didn’t matter, we partook of what we had, which is not to say we ate it all – no, I remember clearly trying to hide peas under the rim of my plate and I’ve heard stories of my brother Stavro covertly placing items behind the refrigerator.

Supper was the time the family regrouped. All were called by the rallying cry, “supper’s ready”! Off went the t.v., down went the books, the telephone conversation was cut short, play was halted and we all came together.

We had marvelous conversations and learned of each other’s daily lives. We told stories, passed on new knowledge, played word games and made plans. Occasionally, we would fight, but most of the time we laughed, a lot. Supper became less about the food and more about the time spent together. It was something I think we took too much for granted. Another apology owed to Mom.

Maybe that’s the “do” I’m missing. Even in the worst of times, Mom found something to make for us so that we could sit together and eat. She may have wanted to conk each one of  us on the head for asking what’s for supper, but she didn’t and we survived to ask another day.

Perhaps I need to take the message more to heart. The t.v. needs to go off, apps turned off, Yoda called in from play and make supper the focus it should be, our family reconnection. Stretched paychecks and crossed schedules need to take a backseat to the preparation of what’s for supper. Nothing says I can’t resent the question, but everything says I can make it mean something else.