On June 27, 1969, the winds of fate gathered and the patrons of Greenwich Village’s Stonewall Inn fought back.  The seeds of Pride were planted.

And on this Saturday, 42 years after the riots on Christopher Street, the second annual Pride Parade and Festival will be held in our fair city.

There will be other parades and festivals more elaborate and attended by thousands around the world. I’ve been to the great parade and festival in Atlanta many times before.  I’ve even been in that parade, but there is nothing to compare to the emotion and inspiration of having this celebration in my own town.

My family and I had been absent from the Pride celebrations for several years until last year.

We would ordinarily choose not to go to the parade because number one it’s hot as blazes in Georgia in June, especially standing in a crowd of thousands and two, as parents we acknowledge that the Atlanta parade can be for more mature audiences, much as Mardi Gras is.

The festival, however had always been wonderful for any age group and we’d always had a great time there.  Except possibly the time our daughter kept fainting, but that was due to the heat and hypoglycemia, not the atmosphere.

The change came when our son was not quite 5 years old.  He was floating on cloud nine because he had gotten so many compliments on his Spiderman costume he chose to wear all day. It had been a good day at the festival despite the usual afternoon showers and fierce southern humidity.

We were tiredly trooping back to our car for the long ride home and it was then that some lovely, Southern gentleman decided that he needed to vent his hostility over our family unit.  This frightened our son, who couldn’t possibly understand that someone would hate his family. He clamored into my arms, buried his face into my shoulder and wouldn’t come out until we were well out of earshot.

If you want to demonstrate your narrow mind to adults that’s one thing, but to take it out on small children – shame on you.

Try to explain to a 4 year old, who has known only love and acceptance, that there are some people in the world who hate him because he has two moms.  Even his spidey powers couldn’t protect him that day in Atlanta.  It broke our hearts.

This combined with the heat (my partner says, yeah – give the gays the hottest damn month of the year to celebrate) gave us the excuse to stay home when Pride came around.

Then our very conventional, conservative town allowed something magical to happen. It granted a permit for a Pride parade.

We decided to go still wary about attending another arena where our son could be subjected to the vitriol of others, but he has in the past four years demonstrated a strength of character that we thought would sustain him if we were confronted again.

Boy, were we surprised, so brilliantly surprised.

The parade was filled with families and friends.  Our son saw his school mates with their straight parents and caught candy thrown by beautiful, well heeled drag queens.The festival was full of music, balloons and games designed for the kids to play.

Smiles abounded. Words of encouragement and love were spoken by supporters.  Tears of joy and wonder were spilled. Many exclaimed with choked voices that they didn’t think they would ever see the day our town celebrated its GLBT citizens with such kindness.

Oh, there were the odd protesters (and some were really odd), but all were welcomed and given and gave respect even when they were holding placards damning us to eternal fire.

In the gay/lesbian community, we often refer to each other as ‘family’.  That Saturday in June of last year was about family. We are looking forward to another Saturday spent with family this year.

I am so proud of my city and the fantastic people who made this happen.  My family thanks you.

*http://socialistalternative.org/literature/stonewall.html  (good site to visit for information on Stonewall.) 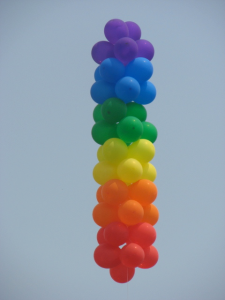 The beauty of a rainbow after a storm.