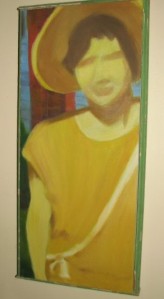 I seem to have an issue with revealing true names here.  Except for my Aunts Tricia and Gloria and myself, I don’t think I referenced anyone’s real name.  And Tricia doesn’t count because only her immediate family calls her that.

My partner, Bashert on the other hand has no qualms at all about not protecting the innocent on her blog. (Bashert’s not her real name – she actually has a beautiful name to be debuted at a later date – but the meaning of bashert fits our lives completely.)

Maybe for me its still the private part of me not wanting to quite put it all out there yet.

Or it could be that I still succumb to our family trait of inventing alternate names for people. I’m not talking diminutives or family words for things.

If Bashert and I can’t remember someone’s name or haven’t been introduced to someone yet, we come up with a mnemonic to use for ourselves as reference points.

Some are just practical observation, others are based on observation and behaviors or circumstance.

We used have a woman who lived in our townhouse complex who drove this beat up, powder-blue, Volvo station wagon.  We could hear the thing coming a mile away, so she became “Volvo Lady”.

We used to have another set of neighbors, who were from China.  The husband spoke English to a point, except when he got excited.  He and his wife had a second baby and when we asked what they had he replied, “It’s a Larry.”  So, from then on out the poor baby was called “The Larry”.

We’ve had a couple of site managers involved with our complex who haven’t been exactly stellar in carrying out their managerial duties. One guy who wouldn’t answer his phone unless it was to tell you not to call, was dubbed “The Nazi”.  His blonde Arian appearance may have had something to do with that one as well.

The second manager expected a tip every time he did any kind of service.  He was knighted as “Master Bates”.

There was a woman in a class I was taking, that had to be one of the whitest people I had ever seen and I’m not talking in the cultural sense, no she was just this side of albino.  So, obviously she became “White Lady”.  I didn’t say we were too inventive.

The nurse who had such an issue with my partner and I when our son was born became “Nurse Ratchet”.

The technician who tortured Bashert with the mammography machine was the “Mammogram Nazi”.  (Nazi becomes a good universal.)

My Dad’s mother who was quite large, became “Great Big Grandma” or “Great Big” after my nephew as a small boy got confused with the relationship great-grandmother.   At the same time my mother, his grandmother hence forth became “Little Grandma”.  He still calls her Little.

One of my daughter’s less savory boyfriends – “The Troll”.

Then there was the embarrassing incident with Bashert and I that involved “The Guy on the Ladder”. Again, not inventive, but practical.

The name calling is not always confined to people.

When we were in college, Bashert had the entire Art Department calling the sculpture lab “downstairs”.  The sculpture labs were down the hill across campus from the the 2D labs – made sense.  I think its still called that to this day.

When I was going through my horrid, nasty nine year divorce, my mother kept a file at her house with all pertinent information labeled as “Roosevelt”.  My ex (referred to in writing as AH – you figure that one out) left on D-Day.

One of my favorites was invented by Mom. She refers to that American treasure, Wal-Mart as the SOD.  Shop of the Damned.  Go ahead, deny that one.

So, until the day when I choose or have permission to let the world know what their true identities are we shall remain known as Bashert (my beautiful, meant to be partner), Yoda (our son) and Neneé (our daughter) and our cast of yet unnamed others.

And be on the watch – you never know when you may be called a name.