The Bedlam family went traveling yesterday.  We hit the ATL; Hotlanta.  Well, we sort of went to Atlanta.  We actually landed in Decatur. It’s a small suburb south of the great city.  It is a city reborn, full of great little boutiques and wonderful eateries.  Our daughter Nené attended their premier women’s college, Agnes Scott for a year.  It’s the county seat of where we lived a while when I adopted Yoda as his legal second parent. It’s a beautiful little city to visit.

We had two missions, the first was an appointment Bashert made to see one of the downtown shop owners.  Bashert is an artist, too and a good bit more enterprising than I.  Since college, she has actually made money.

The shop, Wild Oats & Billy Goats, is a funky little place chock full of fabulous folk-art.  We were both in seventh heaven to be immersed in good art again.  A refreshing breath of air.  I believe we would have stayed much longer if we didn’t have Bashert’s second mission to accomplish.  We usually stick around and take all the photo ops we can, but time was pressing, this was a day trip and the weather reports for later were rather ominous for driving.

After a quick lunch at a local pita establishment, we were off to find Dick Blick’s Art Supply.

Here is where it gets a little tricky.  You see, I had a couple of very long days/nights this past week.  My archaeology professor guilted me into digging the site for several hours this week on top of having to be at work until 5:30 – 6:00am (yes – AM) and attending classes.  Exhausted doesn’t cover it.  I was asleep when Bashert printed out the routes and all the way up to Decatur.  I didn’t check  the maps.

Turned out that what Bashert thought was just Roswell road, was actually Roswell, the city, just north of Atlanta.

Unless we have an absolute, written in stone map, traveling with Bashert can be a bit dicey.  She can locate her childhood home with the barest of landmarks, but give her a map?  So when we discovered that the route involved a toll highway, we were put a little on edge.

The day was saved by my new(ish) toy, the iPhone.  We were able to pull up a decent enough map (I refuse to activate the GPS) to guide us around the toll and to the right destination.

Much to our delight, by not taking the highway, we also got to experience downtown Roswell, a place neither of us had been, despite the fact we are both from Georgia; Bashert being born in Atlanta!

Roswell is a historic city, built on the labors of slaves and mill workers.  This month the town hosts the largest Black History celebration in Georgia.  If we had known our travels were going to take us through there, we would have made arrangements for time to stop.

After the shopping excursion in Dick Blick’s (another slice of heaven for us, even though we were just there for supplies for Yoda’s school), we headed back to visit with Nené for a minute or two.  She was at work so it wasn’t a long visit, but Yoda was overjoyed to see his big sister even for a short time. 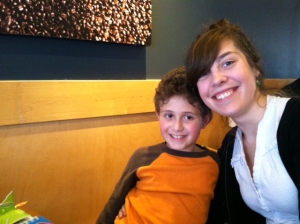 The torrents of rain held off until we got home – not that I would know, I was fast asleep again once the car got moving. Bashert must have known how tired I was because normally I’m not allowed to doze in the car.  I’m navigator and wingman to keep the driver alert.  Bless her little heart.

All in all it a good day trip.