Don’t be scared on Halloween,

For things are seldom what they seem.

We look forward to Halloween every year at our house.  Bashert revels in coming up with unusual costuming choices.  Last year we were all Lego blocks.  One year, Bashert and I were Moses and the Burning Bush – we took home a prize for that one during a Purim Festival later next year!

Costumes are homemade and pumpkins carved by hand in these parts. No flimsy, expensive, store-bought stuff here.  Nope, made from scratch all the way.

This year Yoda is a gangster – not a gangsta’, but a true 1930’s Enemy Number One gangster complete with pinstripe suit, shiny shoes and space blaster.  Hey, when its homemade you make do sometimes.  Bashert and I are not dressing this year, although I think she would make a really good gun moll.

There’s a wonderful neighborhood just down the street from where we live.  The main avenue that runs through it is closed down and an off duty cop keeps watch.  We hit the street before dark so as to avoid the rowdy teenagers and scarier aspects of the holiday.  The whole street really gets into the spirit, either dressing up their homes or themselves – sometimes both.  It’s an old fashioned block party.

Sometimes Yoda brings a friend, as he did this year.  Two gangsters making away with all the loot they could carry.  Bashert and I ran into friends and acquaintances all up and down the street.  We stopped off at a friend’s house for a short visit for Yoda to play and take stock, while we grabbed a quick snack ourselves – they always have great food and company. 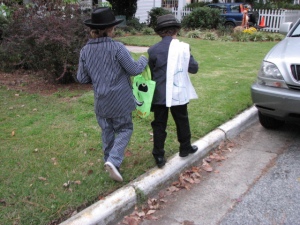 The boys gave out before the houses did, which is just as well.  We usually find long forgotten Halloween candy buried in the closet months down the road.  For all of us, its more the process than the result.  Its still the wonder of a holiday where people give you treats only for putting pride aside and dressing up in anything you want from fairy princess to wicked witch.  How great is that?

So next year instead of dreading coming up with a costume for your children or yourself, take on the challenge and celebrate the magic.  Here’s to cardboard boxes! 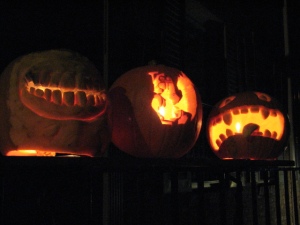