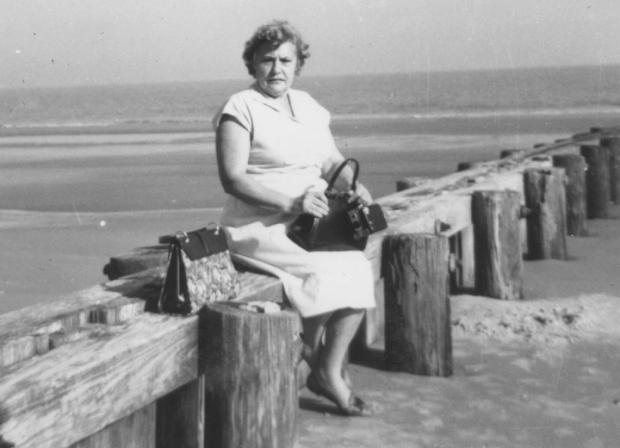 Today is my grandmother’s 100th birthday.

My older brother Stravos, the first grandchild, called her Mama, following our mother’s lead.  It was never changed so our grandmother was Mama from then on out.

This is a true story that gave me a little insight into my grandmother.

The Place at the Table

Girls were raised up right back then; Ginia, the eldest by two years and her mother’s namesake, helped cook and clean, while Annie Caroline had to set the table.  Forks on the left, spoons and knives on the right, knives to the inside, blade in.  Plates two fingers from the edge.

Her mother made Annie set the place each night.  A plate in front of an empty chair.  Empty, negative space in the tableau of the family.   What did Annie think about as they calmly passed the butter beans around and over that empty plate?  What small talk took place to fill that void amongst the quiet clinking of silver to china?  “How was your day, Frank?  Anything interesting down at the train yard?”  “Nothing much, Harriet dear, how was your day?”  “Please pass the beans.”  Did she want to scream?

Not quite five years old and sitting next to a ghost.

My heart aches for the little girl, who had to set that plate.  My grandmother.  Mama.  The sister of the boy who carried her father’s name.  Two and a half years younger than Annie, two year old Francis died during an influenza outbreak in 1916, one day after his second birthday.

Her mother said she wished Annie had died instead.  My great-grandmother.  Mar.  The matriarch of the family I love.  Annie was four and a half years old.  I wonder at the despair that would drive a mother to wish her child dead.  Was the promise of a son so much better than that of a second girl?  Annie, the spare child; the real extra place at the table.
Her brother gone and her mother mad, was Annie allowed to cry or mourn?  Was the plate a punishment for being the stronger of the two?

Girls were raised up right in the time of my mother, too.  She was the cleaner and has no stories of setting the table.  My mother, the third to bear the name.  Mom.  Mama never told her of Mar’s words.  Possibly, it was too fresh, too touchable to set before Mom.  Or maybe the warm, crusty, but yielding Mama the grandchildren knew was too much a hard baked fortress to her children.  The distance to the plate was still too narrow, two fingers from the edge.

Mama took me in when my brother was born.  For six weeks, I was Mama’s.  I was Mama, too, displaced by a younger brother.  Another plate at our table.

Mama offered sustenance, succor and security to my parent’s second daughter, the one who bore her name.  Perhaps, the seeds were sown during that time for her revelation to come.

Fifty years had improved our family’s mortality.  My brother survived his rough arrival and my mother recovered.  I’m told that months after I was returned to my mother, I would still grab my things and get ready to leave with Mama after she came to visit.  I had staked my heart’s claim.

Mama told me of her mother’s words, while sitting on the front porch of her home.  It was set before me in a moment of time right for the revealing.  A moment between a second daughter to a second daughter.  She was seventy years old.  I was twenty.  I never knew Mama had another brother until that moment.  Her words rang flat as she told the story.  Sixty-five years later her mother’s words still served her memory.  How could she sit there so calmly snapping green beans and tell me her mother wished her dead over another?  Did Mama still feel the emptiness and hunger for her mother’s love?  In my youth and shock, I couldn’t find the right questions to ask for more.

Mama never mentioned the plate or Francis again.  It, and he were put back in the cupboard with the rest of the mysteries of her life.

I treasure the moment Mama gave me that afternoon on her porch.  A gift and memory written on my heart as indelibly as the recipe card for her famous macaroni and cheese.

Girls are raised up in this day and age, too.  My daughter.  The fifth to bear the name no longer lives in our house, but there is no negative space set at the table by my son, her younger brother.  There will always be a place, but no empty plate to pass over. Forks on the left, spoons and knives on the right, knives to the inside, blade in.  Plates two fingers from the edge.

Mama passed away in 1989, only 78 years old.  And while her absence leaves an empty space in our hearts, there is never an empty space at our tables. Her place is filled with the laughter and kind thoughts that time and memory create.