We opted to return to a smaller, at home birthday party this year.

But the older Yoda gets the more space his friends occupy, the smaller our townhouse becomes, so we decided to make it a pool party.

For the most part, Bashert prefers to make decorations and whatnots rather than purchase stock merchandise. The past several days our house has been awash in fabric markers, paints, paper cutouts and multicoloured sprinkles.

I generally stay out of the way of such craftiness.  It works to our mutual benefit.

Bashert creates wonderful, imaginative decorations and I keep my sanity.

She did not disappoint.  Here’s just a quick sample.  Check out bashert04 (see blog roll) for more photos and how-she-did-its 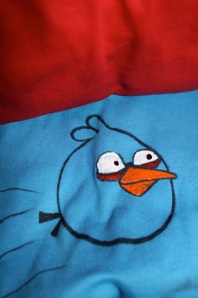 Each kid got a home-made t-shirt.  Bashert had ordered three shirts for us to wear, but in the process of washing and drying, both hers and Yoda’s shrunk to fit only a two year old and an anorexic posh.  How lucky was I that my pig shirt survived.

There’s a metaphor or something in that for sure.

We had a bit of a panic when the townhouse manager let us know that our pool was closed for the weekend due to some chlorination issues.  But he offered up the use of the one across the street at the adjacent apartments, so we breathed a bit easier.

Shlepping a cooler and pool toys across the street would be a breeze as opposed to entertaining seven boys in a two bedroom townhouse for 3 hours.

As parties go, it went without much fuss.  There were no injuries or permanent emotional scars. A near tussle over a ball in the pool – boys and their balls (sorry, couldn’t resist) – was the only iffy moment.

We returned to the house just before the rain hit to have cake (complete with Williamsburg candle), egg-shaped peanut butter sandwiches and snacks.  A good time seemed to be had by all.

But of course like all the best parties, the most fun was had at the after-party.

A couple of boys (The Boy & The Barber’s Son) stayed a while after the majority had left.  At that time there ensued a small scale war between the pigs and birds.  Iratus pennipotenti versus viridis sus. It was epic for its size.

We had everything from a mock Charleston to The Boy doing the robot while dressed in Yoda’s Lego Halloween costume.  That we got on video.

Yoda kept saying he wished this day was a dream so that it would not end.  A great compliment to his Momma’s hard work, I’d say.

It’s just before 10pm our time and Yoda is finally asleep.  Bashert is not far behind, so its just me and Shit Dog reviewing the day. 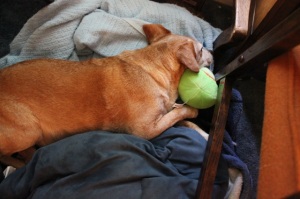