I took a Psychology class a couple of semesters ago.  Cultural Diversity.  Thought it would be amusing to see the official take on my life.

For our final project we had to select a cultural phenomenon with which we were unfamiliar to research, have an experience of then write a paper and give a presentation.

Tats, as I’m told the insiders call them, seem to be everywhere these days. I wanted to see if there had been any real change in the acceptance of tattooing in the mainstream.

Growing up in the 60’ and 70’s nice people just didn’t get tattoos, at least nice people who lived in white bread, middle class suburbia and hadn’t served in the military didn’t.

No, tattoos were for the hard core military, convicts, bikers and ladies of the night.

To this day, despite or maybe in addition to the fact that several of her grandchildren now have tattoos (including my own daughter), my Mom refers to them as trashy – the tattoos, not the grandchildren.

When the kids in my neighborhood played, the ones with the lick and stick tattoos were the bad guys, the ones who had guns and smoked.  Told you, middle class America in the 60’s.

As I grew up and gained a little worldly experience and knowledge, I found cultures outside my own that used skin marking as a means of artistic expression and to scare the wits out of their enemies.  (Check out the movie, The Piano there’s some good Maori tattooing going on there.)

But with my upbringing, these really didn’t have any real impact on my life – tattoos still remained other world.

I truly wondered why it was that any modern person in their right mind would submit to a torturous procedure that I viewed as coming from rather seedy depths.  Nuts.

For my research, I read various and sundry dry research articles that mostly found that tattooing was gaining some ground of acceptance in society as a whole, but this was still dependent on what types of tattooing was done – cute or not so cute.

One little tidbit from a large, southeastern university survey done in 2007 found that while many women may find visible tattoos on men attractive (as the ‘bad boy’), almost half of the men said that they seldom found a tattoo attractive on a woman. 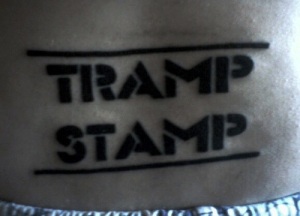 Kinda speaks for itself, doesn't it?

I interviewed a couple of tattoo artists for my paper.  They were both very amenable to my clumsy questions.  I did find it interesting that the artist that had been in the business for all his life didn’t have any visible tattoos and the younger one said that he though his tattoos would restrict him in some of his career hopes. (Found out later that artist one actually has beaucoup tats, but just not down his arms.)

I also interviewed some folks I know who have tattoos.  That was interesting, too.  There was a common theme between them as well.

All three people got tattoos for the personal and permanent expression of feelings, relationships or circumstances.  None said they regretted it or would change them, but each said that they’ve either received flack or covered up to prevent commotion.

It was all the same familiar stuff I had read in the research papers.  It was a ‘yes, but’ kind of thing going on.

I wrangled my way into observing a tattoo being done. 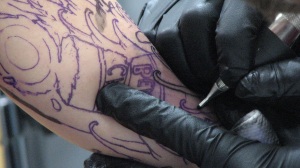 My niece said I could come and watch hers being created if I didn’t ask stupid questions, such as “Does it hurt?”  Turns out that’s a stupid question because its obvious that it hurts like hell in certain areas.

The conclusion of my paper research was pretty much summed up by a phrase from one of the papers I read:

In other words, tattooing was still seen as coming from the wrong side of the tracks and done so on purpose.

There was some shift in the mainstream outlook and there is a new subculture of diverse ages, genders, races and socioeconomic levels that finds it completely acceptable as a means of self expression, but the tolerance shown was more or less dependent upon in what company one keeps, where the tattoo is located and what type it is. (Wow, that’s a pompous quote pretty much straight from my paper.)

My own conclusion was a bit p.c.  I said that I had learned that people will tattoo just about anything on themselves (and they do) for a myriad of reasons.  I also said that I had developed a broader ability to look beyond my own cultural upbringing and not judge those who have tattoos.  But in reality, it is still very difficult even with my own kid. I was raised to be a tattoo snob.

My last question to the class was and now you is – what are our nursing homes going to look like in 50 years with all this tattooing going on?  Think about it; it ain’t pretty. 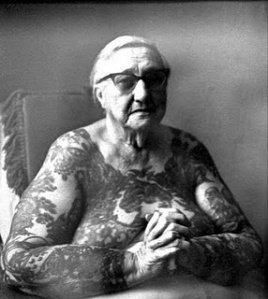