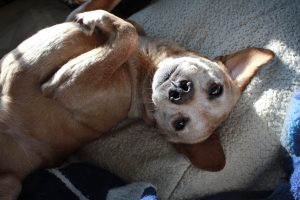 We have a little, brown dog.  He’s mostly white now, but originally he was brown.

He came into our lives in 1998. Our little black dog picked him out as a companion.

He was still a puppy and had been hit by a car, crushing the top part of his right femur and squishing his back paw.  The former owners dumped him at the vet’s office.

He has no ball in that hip joint and his foot looks like Wile E. Coyote’s after a run in with a steam roller.

He was still recovering when we took him home.  We lied to the vet’s office stating that we had fixed up a fenced in area behind our town home.  They weren’t going to let us take him without a fenced area. Ha.

We used to cart him around in a baby stroller because he couldn’t keep up on long walks.  We made the news a couple of times because of it.

His proper name is Dubone.  The family calls him Doobie.  It means teddy bear in Hebrew – honestly, look it up.  Once at a blessing of the animals ceremony, the priest (I know we’re Jewish) got confused and he was consecrated as Debbie.

I refer to him mainly as, Shit Dog.

Shit Dog was a perfect sidekick for our neurotic and reticent Elisheva.  We would walk them on a double leash and he would force her to go meet new people.  She, too had spent a great deal of her early life in a vet’s office.

He was cute as a button, with his forehead wrinkles and playful nature.  He was incredibly smart, but he also had a dark side.

This dark side made him do things that weren’t so nice.

He would leave ‘gifts’ in our bedroom draped with articles of my clothing.  He chewed out all the little buttons on top of my collection of baseball caps.  He chewed holes in my bras and ate a British published, but out-of-print, book that I had borrowed.  (That was fun to try and replace.) He ate my shoes.

One would think I did something to deserve this treatment, but no.  I was simply the chosen one.

We tried crating him, but he ate the crate – literally.  Chewed a hole straight through the side, leaving behind in strips the shirt we had put in there for cushioning.

He revealed a predilection for chocolate.  Yes, we were well aware that chocolate and dogs do not go together, however no one told the Shit Dog.

He has consumed in one sitting enough chocolate to kill a golden retriever. He had his stomach worked on for that one.  The vet’s personnel couldn’t get over the fact that he would eat the charcoal right out of their hands.  He’s done the same thing again and again.  We gave up taking him to the vet for it, he just burps, passes gas and goes on his merry way – sheepish, but happy.

Shit Dog also showed a love for garbage, the riper the better.  To this day we have to keep the garbage bag up on the counter so that he cannot get into it, however putting it up there does not guarantee that it will not be got.

We have seen the kitchen stool pushed up to the counter and the evidence strewn all about the house.  I told you he was intelligent.

He ate four muscle relaxers that had been packed in my luggage.  We called poison control on that one.  He just had a very good night’s sleep.

Shit Dog was introduced to a new nasty habit of consuming other animals defecation, in particular Elisheva’s.  This was a trait taught to him by another dog who briefly resided in our home before letting her depression get the better of her and committing suicide.

I haven’t let him lick me in years.

We found out this year after Elisheva passed away from Alzheimer’s that Shit Dog had become partially deaf from age.  She had been signaling and leading him around.

He has always been a bit high strung, the chihuahua part of him, I suppose.  After a brief period of mourning for Elisheva, Shit Dog’s anxiety issues came on full tilt. We always said he needed to be the first to go.

Our neighbor, a lovely woman from Belgium, who survived the London Blitz called to let us know (how kind), that Shit Dog was barking and howling through the day when we weren’t home.  Since we have been through animal control issues with said neighbor before, we weren’t too concerned at first.  But I happen to witness the behavior first hand one day.

There’s been some changes.  He thinks he has to urinate a good bit – more so than standard for a puffed up, little, male dog, but he really doesn’t.  He tires more easily and he does’t wrap up in his blankets like he used to do, but other things remain the same.

He will still gulp down any unguarded chocolate milk.  And out of the past, oh six weeks, he’s probably eaten the garbage about four times. The defecation eating ended with Elisheva.

We don’t worry about it anymore.  We figure at this point, he’ll go satisfied. Damn Shit Dog.